What Does Crack Cocaine Look Like? Your Questions About Crack Answered 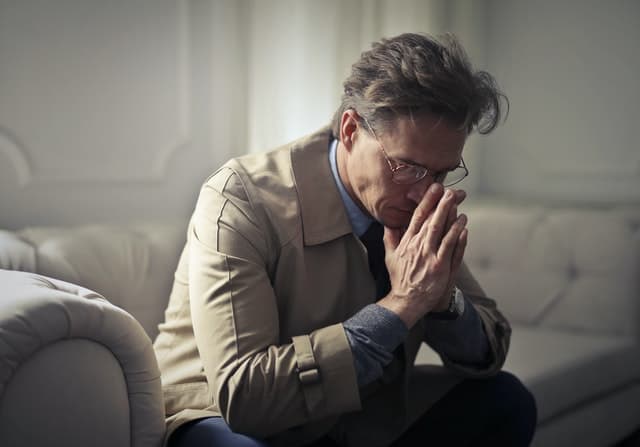 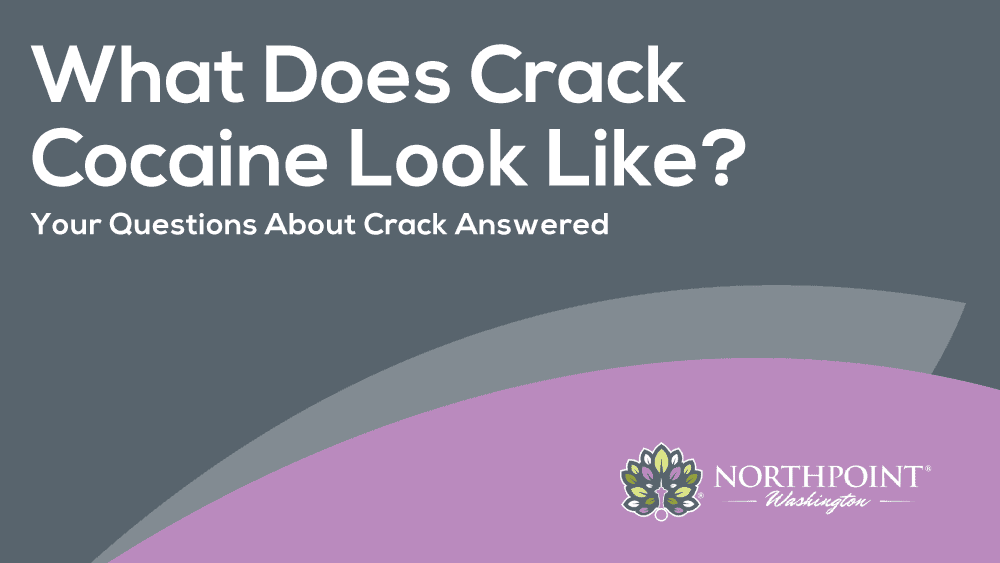 Let’s talk about crack cocaine. We’ve all heard about it, but do we really know what it is? If we’re honest, most of the time how we picture something is tied to a TV show, movie, or just a story from someone we knew growing up. Maybe you’re reading this after you found something lying around the house that leads you to believe a loved one is battling crack cocaine use, or maybe you’re just curious. Let’s examine what crack looks like, the effects it has on the human body, crack addiction treatment, and more. Crack cocaine is often simply called “crack,” and is a drug made using powdered cocaine. On the street, it can be referred to by a lot of names. Names include but are not limited to: While cocaine is the main ingredient when it comes to making crack, it’s also mixed with water and baking soda. After it’s boiled and dried, it’s broken into chunks. With it being smoked, many experts report crack cocaine addiction usually develops faster than addiction to pure cocaine. Drugs that have a similar effect on the human body can be hard to find. Crack can be a powerful drug, and with dependence and building a tolerance, crack use tends to increase to get the desired high. The effects of crack also depend on how long you’ve used it. With longer crack use, side effects tend to worsen. Even dating back to 2006, 8.6 million Americans ages 12 or older reported they had used crack. From that same survey, 6.9 percent of those between the ages of 18 and 25 said they had used crack in the last year, and 3.2 percent of high school seniors said they had used the drug at some point. Those who use crack may also mix it with other drugs, such as marijuana (fry daddy, caviar, cocoa puffs), phencyclidine (clicker), amphetamine (croak), heroin (moon rock), and tobacco (coolie). Combinations of these drugs can be dangerous. 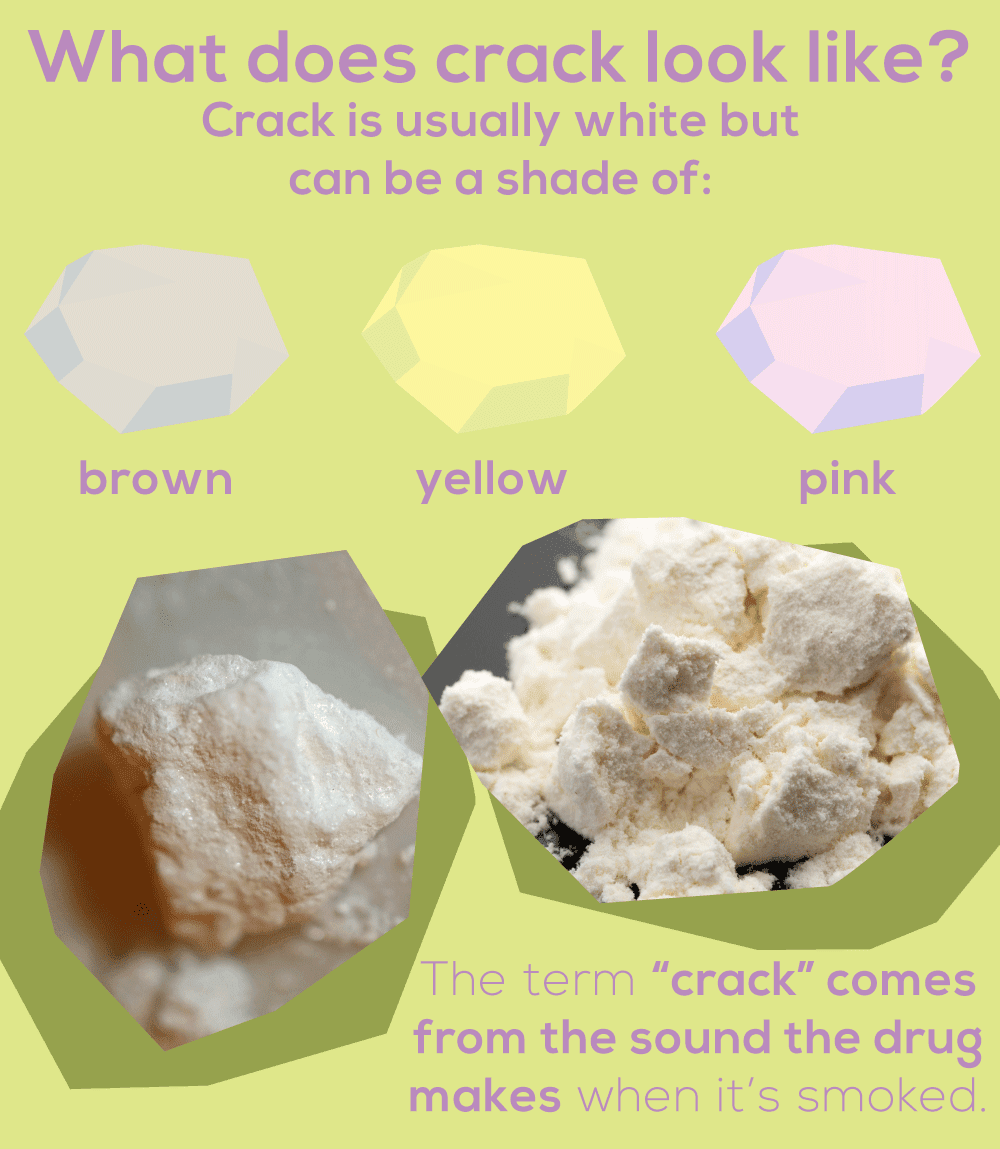 Crack rocks, as they’re called due to their hard texture, can be found in any shape or size, and are usually a shade of white. In some instances, crack can be a shade of brown, yellow, or even pink. The term “crack” comes from the sound the drug makes when it’s smoked. Especially when the crack rock is burnt, the color will shift to a shade of brown, which is also made clear by the residue left behind on the pipe. The color of the crack rock also may vary depending on what chemicals the dealer mixed it with. Typically, the size of a crack rock varies but they are generally seen as the size of a small pebble, rarely reaching the size of a dime. In most cases, crack rocks are sold for $10 to $20 each, and weigh anywhere from one to three grams each, according to a collegiate study. When it comes to the smell of crack, it is often described as being like burning plastic. Others say there’s really not a consistent smell, and it just depends on a variety of things. Dealers may add other chemicals to the mix that could affect the smell.

What Are the Effects of Crack Misuse?

Those who use crack usually do so to get the high feeling we talked about. Continued use may lead to the brain being unable to produce dopamine (a “feel good” chemical) without the drug, which can lead to addiction. Crack is often called the most addictive form of cocaine. 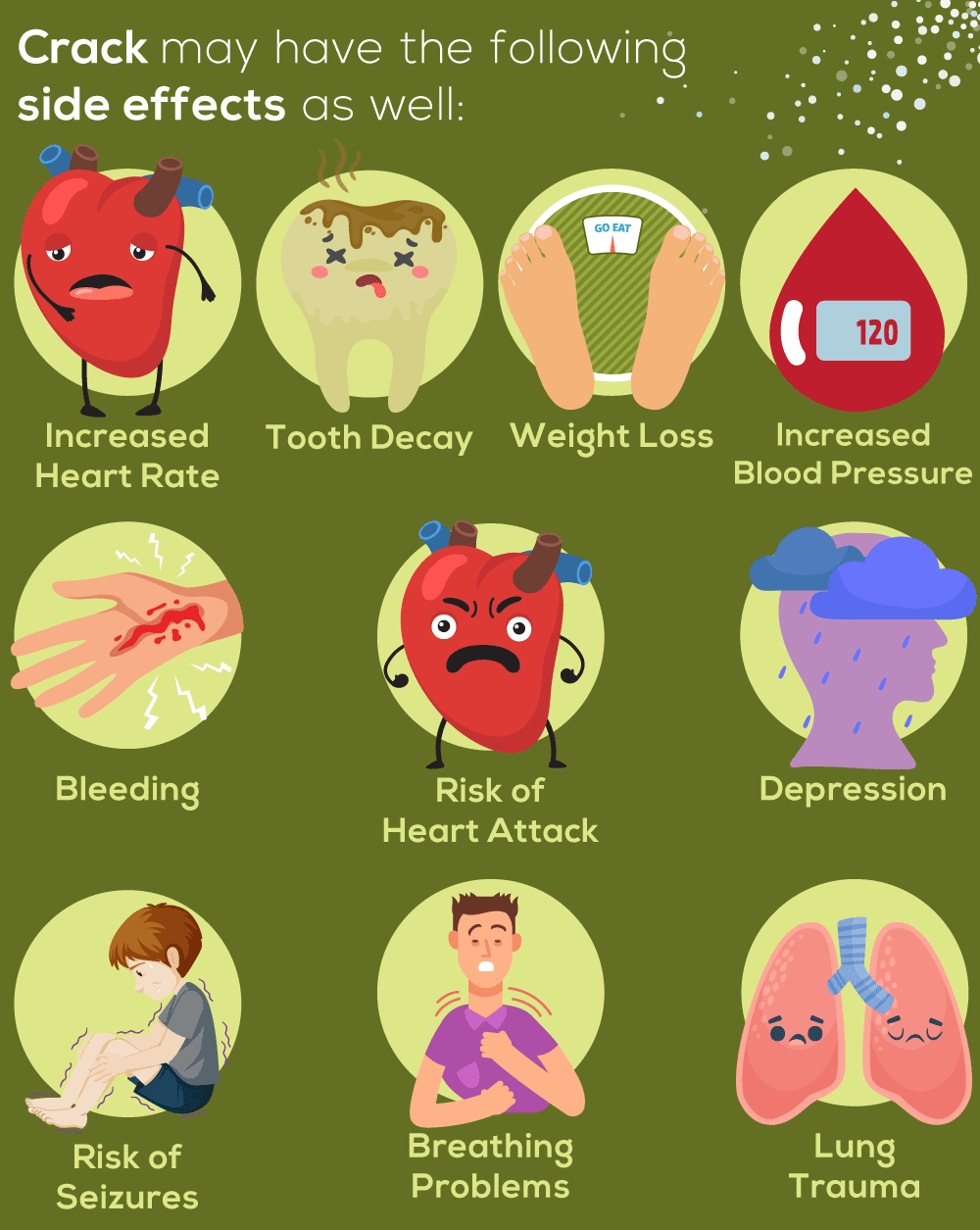 Crack can also make people feel paranoid, aggressive, or other unwanted feelings. Crack misuse may have other effects on the body such as:

Crack misuse may damage family life, friendships, and careers. It also affects people from all walks of life. Many who use crack will try to quit on their own, but the withdrawal can be severe. Withdrawal can include:

A Brief History of Crack Cocaine

The origins of crack can be traced back to the late 1970s and early 1980s. Crack first became popular in larger U.S. cities like New York, Miami, and Los Angeles. Since crack could be broken into smaller pieces, it became a big moneymaker for dealers. Throughout the 1980s, the drug swept across the United States. This led to what is now known as the “crack epidemic,” which ran from the 1980s until the early 1990s. That’s not to say crack isn’t an issue today. Nowadays, crack is easily available around the world. Crack is a Schedule II substance, according to the U.S. Drug Enforcement Administration. Other Schedule II substances include methadone and methamphetamine. The DEA says these drugs are very likely to be misused, and may lead to severe mental or physical addiction. Crack produces a quick high resulting in an increased sense of happiness. The high can last up to 10 minutes. The dopamine levels then drop quickly, which can result in depression. Since crack has been around for decades, there are now successful forms of treatment available.

What Are the Different Forms of Cocaine?

As we said earlier, before it becomes crack, the base form of the drug is cocaine. Cocaine is made from the leaves of the coca plant, which comes from South America. The National Institute on Drug Abuse (NIDA) says cocaine is often a white, crystal powder. “Street dealers often mix it with things like cornstarch, talcum powder, or flour to increase profits. They may also mix it with other drugs such as the stimulant amphetamine, or synthetic opioids, including fentanyl,” according to the NIDA. Cocaine is often called:

Cocaine is usually consumed by snorting or by rubbing it into the gums. It can also be dissolved and injected into the bloodstream. The NIH says when cocaine is dissolved, it can sometimes be mixed with heroin to create what’s called a “speedball.” Other forms of cocaine include crack, freebase cocaine, and cocaine hydrochloride. We’ve already talked about crack and basic cocaine. According to the Indiana University School of Public Health, freebase cocaine is made by dissolving cocaine powder in water and ammonia. While uncommon, cocaine hydrochloride is used for medical purposes like throat, mouth, and nasal surgeries.

What Are the Symptoms of Cocaine Addiction?

Cocaine raises the level of dopamine in the brain. The most common effects of cocaine misuse are:

Those who snort cocaine may also eventually have a loss of smell, nosebleeds, frequent runny nose, and problems with swallowing. Consuming through the gums or mouth may lead to bowel decay from reduced blood flow. According to the NIH, injecting cocaine also raises the risk of getting HIV, Hepatitis C, or other illnesses. Cocaine overdoses are a risk as well. Symptoms of a cocaine overdose could be a heart attack, stroke, irregular heartbeat, or seizure. Death can also happen even if cocaine is being used for the first time. The Substance Abuse and Mental Health Services Administration reported, “In 2018, an estimated 5.5 million people aged 12 or older were past year users of cocaine, including about 757,000 users of crack. Stated another way, about 2.0 percent of the population in 2018 used cocaine, and 0.3 percent used crack.” According to the Centers for Disease Control and Prevention (CDC), cocaine overdose deaths rose by 52.4 percent in 2016. In 2017, an estimated 14,500 were expected to die from a cocaine overdose. While there’s no specific treatment for a cocaine overdose, NIH says treatment involves supportive care and depends on the symptoms. In some cases, medical professionals may treat overdoses by restoring blood flow to the heart, restoring oxygen-rich blood supply to the brain, or stopping a seizure. Frequent cocaine use can cause long-term changes in the brain’s reward system and other brain functions, which could lead to addiction, the NIH says. The brain eventually adapts to the extra dopamine, which makes it less sensitive to it. This can lead to more frequent use. Cocaine withdrawal may include:

It’s important to remember you don’t have to go through withdrawal alone. The dangers are there. Without medical supervision during a cocaine detox, more serious complications may include malnutrition, dehydration, blood pressure changes, and infections.

Here at Northpoint Washington, we are dedicated to helping you or a loved one overcome crack cocaine dependency. If you think you’re addicted to crack, ask yourself a few questions. Are you losing relationships in your life? Are you struggling to go to work or school? Are loved ones encouraging you to seek help for crack misuse? You can also take an addiction quiz here, and you can ask for a free addiction assessment by phone here. We are a highly specialized drug and alcohol misuse treatment center in the Edmonds, Washington, area. We offer individualized 28-day detox and rehab programs that are designed to help patients avoid relapse and stay sober for the long haul. You should never have to go through this alone. Actually, it’s important you don’t recover from crack addiction alone as it can be extremely dangerous. You should start your road to recovery with professionals to help. Patients will need to go through a period of detox before moving on to rehab. The detox process will help remove the toxins in your body, and could make for a less severe withdrawal. Detox usually takes anywhere from seven to ten days, but it could take longer. The rehab portion will focus on the mental aspect of crack misuse. We offer one of the best treatment programs in the state here at Northpoint Washington. Our 28-day inpatient program for those fighting crack dependency includes:

The three steps of recovery for patients are detox, rehab, and aftercare. At Northpoint Washington, we believe the only thing that stands between you and recovery is a decision to get help. If you believe a loved one is dealing with a crack cocaine addiction, you may wonder if you should schedule an intervention. We also provide intervention services to help you with that decision.

Northpoint Washington offers personalized treatment for every patient. With locations near big cities, our goal is to make getting treatment as easy as possible. Patients will get their own customized treatment plans once they enter rehab. By doing this, we can offer support based on each person’s needs. We understand everyone’s crack misuse is different, and we believe it’s critical to understand why you started using it. During rehab, you’ll meet your therapist, and you’ll determine the root cause of your addiction. You will also work with other patients during group therapy. This, in turn, will help patients help each other. Treatment plans vary. It’ll be catered to your needs. Our admissions staff is here to help you get started with treatment the right way. They’ll verify your health insurance, help set up travel plans, and make sure your transition into treatment is hassle free.To learn more, call 425.437.3298. Most of the time, the pipe used to smoke will have a brown color around the base of the pipe. Also, someone who uses crack may have burnt fingers or lips from the heating process. As we talked about earlier, crack comes in the form of “rocks” that are a hard, white, or off-white substance. Crack is also sometimes sold in plastic bags or small bottles.